Speed up your bruise recovery

Ouch, bruises can be painful and cause swelling

This article contains some useful information about bruises, the pain they can bring and how to treat them.

It is possible to effectively speed the natural recovery process from this painful condition. Some people recover from a bruise very slowly and take weeks. For others, it can get better in a few days.

Increasing the recovery speed of bruising

Bruising results from the release of blood from the capillaries into the tissues under the skin. 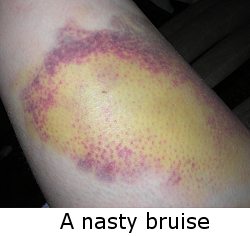 The characteristic bluish-black mark on the skin lightens in colour and eventually fades as the blood is absorbed by the tissues and carried away.

Bruising usually occurs as a result of an injury, but can occasionally be spontaneous and an indication of an allergic reaction, or more serious disease.

Eat foods high in bioflavonoids, originally called Vitamin P. A bioflavonoids primary job is to protect the capillaries, keep them strong and to prevent bleeding. Bioflavonoids are also anti-inflammatory. Lemons, green peppers, broccoli and rose hips are good sources of bioflavonoids. If taking bioflavonoid supplements, for the best absorption into the body, take with Vitamin C.

The early Greek herbalists considered St. Johns Wort an effective herb for healing wounds . It was used to dress sword cuts in the Middle Ages. Modern analysis of the plant has shown the plant to have antibacterial and astringent properties, both qualities useful in the speedy healing of cuts and wounds.

Externally, either add a few drops of tincture to an organic oil or cream and gently apply to the bruised area or apply a few drops of the tincture directly to the skin and allow to soak in. An infusion can be used to bathe wounds, skin sores and bruises. Internally, take as an infusion or tincture for anxiety, nervous tension, irritability or emotional upsets. For long-standing nervous tension, take a tincture for at least two months. 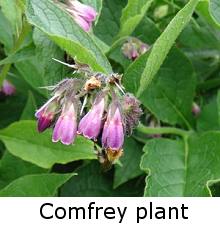 Comfrey is among the oldest herbal remedies for skin problems. Poultices of the fresh leaves are a traditional home remedy for sprains, bruises and cuts. Comfrey not only promotes the healing of tissue and bone, but at the same time reduces swelling, effectively speeding up the healing process.

Comfrey's healing powers have been attributed to its high content of allantoin, a substance that promotes the growth of tissue, bone and cartilage, both externally and internally. There is however some controversy over the safety of taking comfrey internally over a long period. It contains pyrrolizidine alkaloids, compounds that are toxic to the liver. So use liberally in a cream or oil externally on bruised skin.

Believe it or not, cabbage may help

Cabbage has traditionally been used for medical purposes as well as for cooking. It has anti-inflammatory properties, and contains chemicals which can prevent cancer. Applied to bruises and swelling, macerated cabbage leaves will encourage healing .

Bruises - How to improve your circulation

How water can help a bruise

Exercise can help with bruises