Reasons why too much sugar is bad for you

Cut down on sugar and it gets easier

More about the dangers of Sugar - Page 2

Read on to get more facts about sugar. It is important for you and your family:

The reason it is a big problem:- Sugar is addictive

A second reason that sugar is so harmful is that like heroin it is very addictive. Because it is so delectable and seductive to the taste, it is also habit forming. 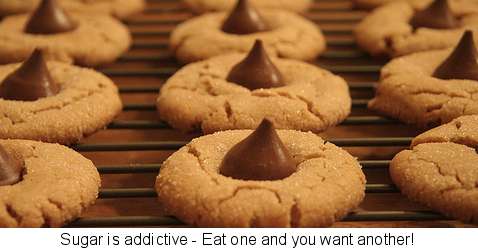 Unfortunately many people start with sugar in baby formula, and so people not only develop a strong taste for sugar but an insatiable craving for it. So much so, that they never seem to get enough of this poison.

Because sugar supplies so many empty, non-nutritious calories, the body is never really satisfied. So the body never gets the basic all-round nutrition that it needs. So more sugar is craved and consumed!

Even more unfortunate is the fact that a great deal of sugar that people consume is hidden within the foods they eat. Manufacturers add sugar to the most surprising of foods. This makes it taste "nicer" but it often camouflages the fact that the food is often "empty".

A third reason is that the damage sugar does is slow and insidious. It can take years before it ruins your pancreas, your adrenal glands, or throws your whole endocrine system out of kilter. All of these contribute to a long list of damage.

Blood sugar levels get thrown into turmoil and energy levels can become rather chaotic. This in turn can bring about mood swings and even bring about type 2 diabetes.

Many foods are loaded with hidden sugar

A fourth reason that sugar is so harmful to the world, is the incredible amounts of sugar that civilized nations consume.

Americans in particular are often told how they are the best fed and best nourished people on the face of the earth. If we are talking about processed junk food - this is true.

If you examine the "foods" in any supermarket more closely and start reading labels, you will find a surprising amount of foods that contain sugar - and not just a little bit!

Many, many foods are loaded with it - from cereals, to soups, to ketchup, to hotdogs.

Even flue-cured tobacco can contain as much as 20% sugar by weight. Some cereals are as much as 50% sugar.

It is actually a rather sad state of affairs. Click on this picture to see another site about hidden sugar in food: 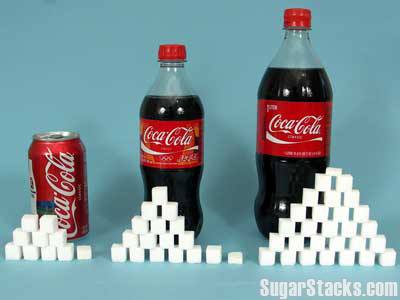 Just what damage can too much sugar do to the human body?

When we talk about sugar, we are including bad nutrition as a whole, since anyone who indulges in too much sugar tends to also have bad dietary habits. Here's the partial list:

Some of the other effects of sugar on the body are:

There are a number of books available on the subject, but perhaps one of the most interesting ones is "Sugar Blues" by William Dufty. It is available in most Health Food stores.

So cut down on how much sugar you eat!

How to get some healthy sweetness

The truth about Cholesterol