Cut down on sugar

The Mediterranean Diet and Lifestyle - Could it increase your life expectancy?

Recently published findings from Holland's Maastricht University, point to a very interesting fact: they say that a Mediterranean style of eating and living may contribute towards an extended life expectancy.

The research looked at the lifestyle choices and death rates of 12,000 men and women aged between 55 and 69 over a 25-year period. Professor Piet van den Brandt concluded that these following factors could could "substantially reduce" the likelihood of early death:

Apparently, life expectancy can be increased

These findings also state that women could potentially live for up to 15 years longer and that men could possibly extend their lives by as much as 8.5 years. The Daily Express article goes on to say that this is the first time scientists have been able to calculate exactly how many years this lifestyle could add to the average life.

High levels of vegetables, fruit, nuts; fish and whole grains and a low intake of meat and alcohol seem to be the main contributing factors to a lifestyle built to survive. Professor Piet van den Brandt is quoted as saying,

"This is the first time a study has looked at lifestyle and overall dietary intake on life expectancy. Most earlier studies have looked at certain specific nutrients and their effects. But they haven't looed at diet and lifestyle as a whole. It is also the first serious study to draw a distinction between men and women in the effects that lifestyle choices can have on mortality.

Each of the participants were assessed at the outset on diet and lifestyle. They were weighed to calculate their body mass index, with anything between 18.5 and 25 deemed as normal and healthy.

Those who did not smoke and who maintained a healthy weight with good diet and exercise were found to maintain much better health, as they grew older.

The people that stuck closely to a Mediterranean diet - with high levels of vegetables, fruit, nuts, fish and whole grains and a low intake of meat and alcohol - did best of all."

The Mediterranean diet was "significantly" more related to a lower death rate in women.

Firstly, where is the Mediterranean?

The Mediterranean is an area that covers from the Southern Spain through to southern Turkey and then also from Northern Morocco to Northern Egypt. The name 'mediterranean' itself comes from the Latin mediterraneus, meaning "inland" or "in the middle of the earth."

The Mediterranean sea is a large enclosed sea, connected to the Atlantic Ocean at its most westerly point by a small trip of water only 14km wide; known as the Straits of Gibraltar and joined by The Dardenelles to the Marmara Sea in the east. The Dardanelles has a maximum width of 7km. The Mediterranean Sea is the water that connects Southern Europe to Northern Africa and as such provided both historically as well as currently, very important trading routes.

The Mediterranean Sea is the main geographical feature in this area and so this lifestyle that promotes health and longevity, also belongs to the sea. Temperatures in the Mediterranean areas are warm most of the year with winter temperatures being mild and only on rare occasions dropping to be very cold. Mostly, people who live in Mediterranean regions, live close to the sea and breathe that healthy life-giving oxygen. 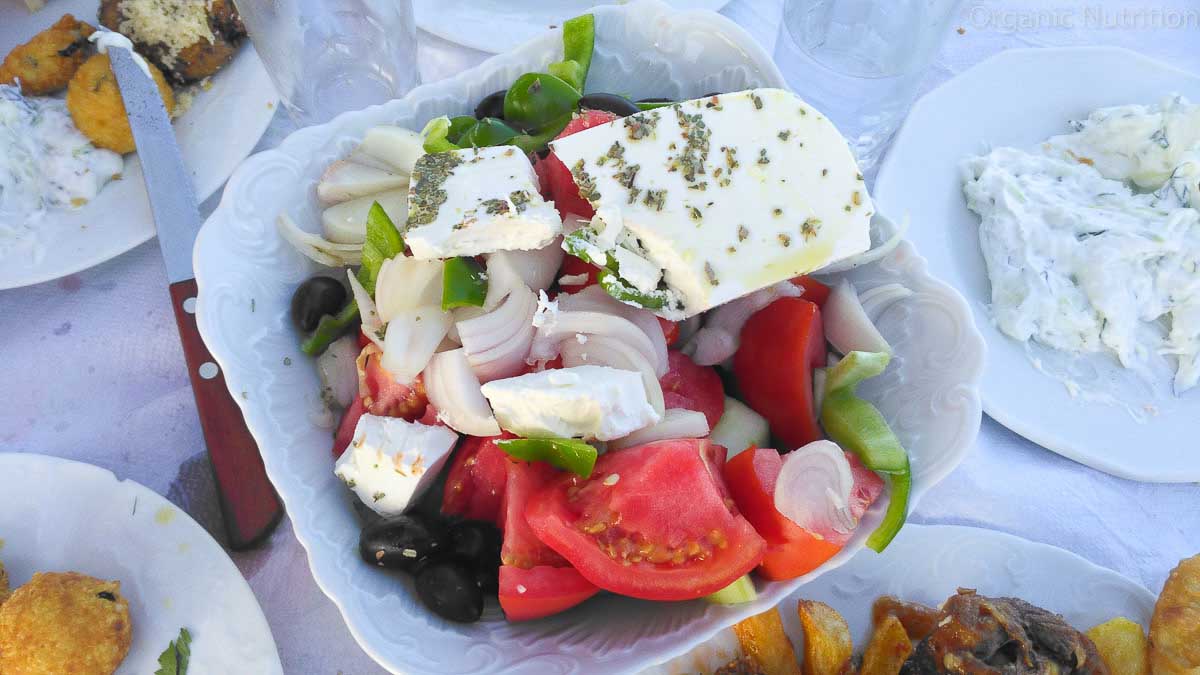 What is the Mediterranean Diet?

The Mediterranean is not short of sunshine, so the natural foods that grow in this area are steeped in natural goodness and have been ripened by the sun.

People who live in the Mediterranean especially enjoy a diet rich in olive oil, vegetables oils, garlic, fresh leafy green salads with avocados, tomatoes, fetta cheese, cucumber, salad dressings, pasta, couscous grains and many other fresh, healthy foods. Examples of a great Mediterranean recipe is the Greek salad which is made of fetta cheese, olives, tomatoes and cucumber.

The diet in Mediterranean areas is also high in red wine, fresh bread, plenty of garlic - which is a great natural anti-oxidant and has been referred to as Nature's antibiotic - olives, tomatoes, pasta and fresh salads. Italian food is especially rich in garlic and also has a lot of salad dressings, olive oil or vegetable oils and lemon juice.

Garlic has been used for both culinary and healing purposes for hundreds of years. It is known to have anti-bacterial, anti-viral, anti-fungal and anti-oxidant properties.

Garlic helps to fight bacteria reduces cholesterol build up in the blood stream. As an anti-bacterial, it helps to maintain the immune system and is a blood-cleansing herb.

Garlic is known as one of the foods that is very rich in anti-oxidants. Often referred to or called "Nature's antibiotic", garlic helps to cleanse and purify, it has the opposite effect of 'bad cholesterol', which can, over time, clog up the walls of arteries.

Garlic has also been used to help control blood sugar levels and is an all-round winning herb. It is found in many recipes related to the Mediterranean diet.

In the Mediterranean, more people cook and use olive oil than butter and being a liquid fat at room temperature, makes olive oil an excellent fat to use. Olives are eaten whole in salads or pressed into olive oil, which is one of the biggest exports of the Mediterranean region.

Olive oil is a rich source of heart-healthy fatty acids, such as polyunsaturated and monounsaturated fats. These fats are rich in what is known as good cholesterol, or HDL as it is also referred to which is High Density Lipoproteins.

HDL provides the body with good sources of cholesterol, while at the same time, helping to reduce the amount of so-called unhealthy or 'bad cholesterol' - this is also known as LDL or Low Density Lipoproteins. LDL is the cholesterol that can start to leave deposits inside the artery walls.

Olive oil is also high in Vitamin E, which is another heart-healthy reason to use olive oil in place of butter.

Red wine is made from grapes which are rich in antioxidants

Grapes are almost a wonder fruit as they contain so many wonderful nutrients. The darker the grape, the more goodies they have in them. Grapes contain Vitamin A, C & Thiamine. TheyGrapes also contain Calcium, Phosphorous, protein and some carbohydrates.

Red wine is said to contain some excellent anti-oxidants from the sun-ripened grapes grown in the Mediterranean, which can benefit heart health and circulatory health.

Tomatoes are a great source of Vitamin C

Tomatoes are a large part of the Mediterrean diet. They have a high content of Vitamin C and also contain a powerful antioxidant called lycopene.

Tomatoes are a good source of potassium, niacin, vitamin B6, and folate, which may help to balance blood pressure. Vitamin K is also found in tomatoes and is said to help maintain healthy bones.

Spices are a favourite part of the Mediterranean diet and are used in many dishes as well as adding flavour to drinks.

Cumin seeds, tumeric, saffron and chilli peppers are well-known spices for Moroccan dishes while in Italy, oregano and basil are included as favourites for pasta and pizza dishes.

The Mediterranean is one of the homes of exotic spices and flavoursome foods abound in these regions.

A lot of Mediterranean food is eaten fresh and this means that none of the vitamins and minerals have been destroyed by cooking. Steaming is preferable to boiling vegetables and eating them fresh gives the highest chance of maintaining their nutritional benefits.

Ayran is a Turkish drink made of cold yoghurt drink mixed with cold water and sometimes salt. The word 'ayran' is Turkish for 'buttermilk' - which is the liquid left after butter has been churned. Ayran is drunk in many regions of the Mediterranean and there are many varieties of it, although Turkey remains the largest manufacturer of this drink. In Greece, Ayran is known as sour milk. It is an equivalent to the Indian 'lassi' drink.

Red wine is a famous and well-known drink of the Mediterranean diet. It is made from sun-ripened grapes - the red ones. Red grapes are rich in plant compounds which are known to be rich sources of anti-oxidants, hence the idea that red wine is 'good for you' - it is the grapes that it contains that are rich in Vitamin C and antioxidants.